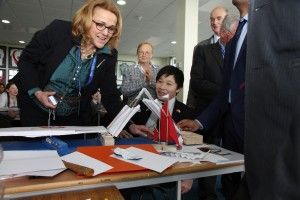 How do you get 130 children to abandon their mobiles for the day?

Leicester Grammar School paid hosts to the 2ndannual technology tournament organised by the Rotary Club of Leicester on the 26th February 2016.

The event was thrown open to nine Leicestershire schools to send students studying design to test their mental ability to solve a technical problem. In this year’s challenge the students needed to design and build a bridge crossing two imaginary bodies of water on a wooden base. The advance students needed to make not only a fixed bridge span but also an opening span similar to Tower Bridge on the Thames.

The working time was limited to 4 hours and during this the students needed to design, test, build and catalogue their work. Points were awarded for each step of the process including their thought processing and management. At the end of the allotted time the bridges were tested and marks added together for their achievements in meeting the technical brief.

Derek Sadd & Colin Derek of Leicester Rotary provided the inspiration for this project and coordinated the event along with supplying the materials and model bases. Another 12 Rotary members acted as judges and master of ceremonies keep the event running like clockwork.

Without a doubt the imaginations and attention of all 130 students and 11 teachers was captured by the event. The bridge building results were amazing and all that attended were looking forward to the 2017 event.

Our thanks to Colin and Derek for their considerable efforts and to Leicester Grammar for the venue.

The winning groups are featured below