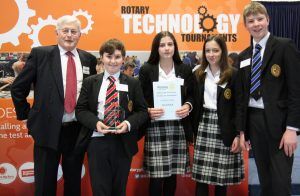 On the 21st February 2018, Leicester Rotary  organised a Technology Tournament,  kindly hosted by the Leicester Grammar School, Great Glen. There were 10 schools taking part, 10 from across the County, and from one just across the border, in Lincolnshire. There were  140 students, across key stage 3,4, and 5, and 12 teachers taking part in an unseen challenge, which involved engineering, technical, and design skills. The teams were composed of 4 students and there were three different levels of complexity at each key stage. This is a highly regarded competition,it sits at the heart of STEM subjects, is awarded Crest accreditation by the British Science Association, and is particularly challenging, but has fun at the heart of it.

These tasks, that were set by Rotary, put the participants’ STEM skills to the fore, involving teamwork and testing their ability in planning, design, ingenuity and innovation, along with manual and presentation skills. Competitors can apply for a Crest Certificate from the British Science Association.

The competition was sponsored firstly by a local charity,The Sir Thomas White Loan Charity,whose Vice Chairman, John Waite,  presented trophies to the three winning teams at each key stage level. Sir Thomas White  offer loan support to young artisan entrepreneurs from Leicestershire and Rutland,along with scholarship opportunities, again, to local students.
Leicester Rotary were also grateful for the support from local companies, Pick Everard, and Hodges & Drake, who enhance the trophies awarded to the winning teams, by offering an opportunity to visit their respective premises to see and understand how design applies in the workplace.
Colin Davies, Head of the School of Design at DeMontfort University was in attendance, as well as a senior lecturer, also from the University, the President of Leicester Rotary, John Waite, Vice-chairman of Sir Thomas White, Rotarians from other clubs, both across Leicester, and as far afield as Telford in Shropshire.
This was a special day…with a real joint effort to involve young people in design and technology.
The schools taking part were :-
Uppingham School
Rawlins Academy
Ratcliffe College
Lancaster Academy
Stamford Endowed
Beauchamp College
Sir Jonathan North
Leicester Grammar
Bosworth Academy
Manor High

John Waite, pictured left, presented the winning teams with a trophy and certificates.

An invitation to take up the challenge.

A team discussing the project.

Rotary club members round the table.