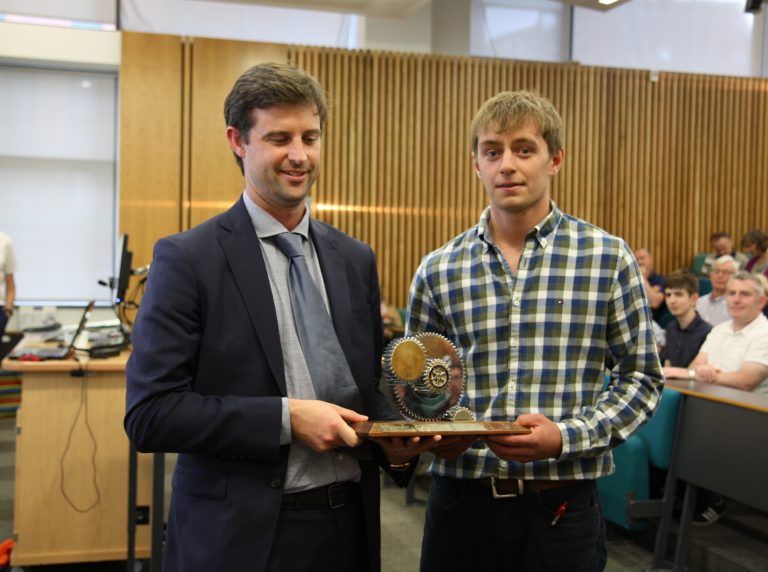 On the 16th.June 2018, some 60 or so students from schools across the City, County, Rutland,Northamptonshire and Lincolnshire  gathered on campus at Leicester’s DeMontfort University to take part in the Rotary District 1070 finals of the Young Designer of the Year competition. Students  have taken part in competitions and/ or a selection process at school level, and so there were probably 600 or so students who initially took part in this process.

Organised by the Rotary Club of Leicester, and hosted by De Montfort University, this is an important showcase for the design and technological skills of the young designers taking place,and there are some valuable rewards for the winners.

Judges, who like the contestants, come from across the City,County, and indeed, Cambridgeshire,  looked at student’s work and projects, produced during their GCSE and A level studies.  There are a multiplicity of designs, which can be either in textiles, electrics, hard resistant materials,( wood, glass, metals etc), or graphics, and this complexity adds to the challenge of choosing  winning entries.

In addition to the Rotary prizes, and adding to the occasion, students could be awarded one or other of the following prizes;

The overall winner of the ‘Rotary District 1070 Young Designer of the Year Award’, carried away a stunning Rotary trophy, a £500.00 Amazon Voucher awarded by De Montfort University, who also provide  Mentorship support to the victorious student.

The Sir Thomas White Loan Charity, who support many young entrepreneurs in the City and County, and recognising the need to  promote design amongst emerging talent,   also presented a £500.00 Amazon Voucher, which was awarded to the Young Designer of the Year from Leicestershire and Rutland.

Top Dog Marketing have given four trophies, and to be awarded to and recognise the level of skills and craftsmanship that some students demonstrate, so the ‘Craftsman of the Year’, both at GCSE and A Level. And again, at both levels, to the ‘Innovative Young Designer of the Year’ award.

Also attending the event were competitors who have taken part in the ‘Young Photographer’, and ‘Young Writer” of the year competitions, again sponsored by Rotary District 1070

The President of the Rotary Club of Leicester, Richard Power opened the day’s events, and Chris Davies, District Governor of Rotary 1070  presented certificates and prizes to winners.

Pictured below are Sam Walker, winner of the Rotary Young Designer of the year ward, for his apple press design, and winner of the Sir Thomas White award, Lucy Ring ,for her temporary shelter for refugees.